This is so good and easy.  It is so much easier to make than a pie.  It also makes the house smell good too.  Serve with vanilla ice cream or whipped cream. 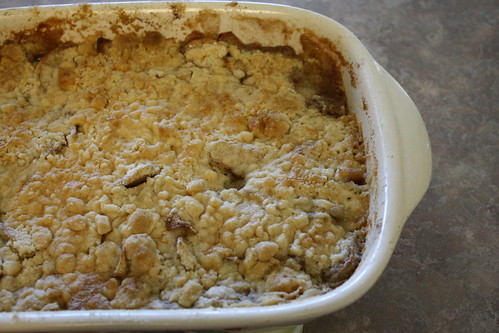 I decided to make Pioneer Woman’s Layered Salad.  I loved the fact that this salad was made the night before and refrigerated overnight.  I could grab the salad in the morning and go.  I still needed to keep the salad cold so I put it in one of those soft sided coolers with one of those freezer packets.

It worked out great.  When lunch came around, I got the salad out and it was still cold.  It went over well with everyone.  There is only one thing I would change about this recipe though.  I would leave out the bacon.  After leaving the bacon in the salad for 24 hours, it became soggy and was no longer crisp.  That part was not very appetizing but the rest of the salad was really good.  So next time you have to bring a dish consider Layered Salad.  (Shhh….don’t tell Pioneer Woman but leave out the bacon!  It doesn’t work in the dish!)