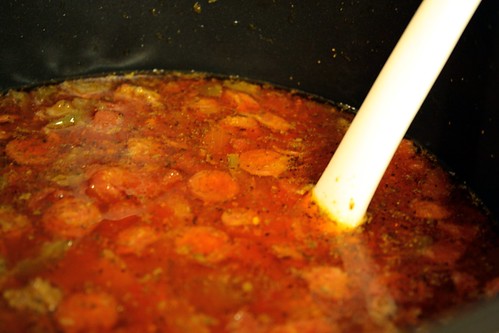 Our family has been hit hard with some kind of respiratory virus.  I have had a horrible cough for weeks and needless to say, I have not been wanting to cook much.  We haven’t had much of an appetite either.  It seems like soup is about the only thing that we feel like eating for the moment.  Luckily, after Thanksgiving last year I made up a big batch of Turkey Soup and froze it.  It has been great to just get that out of the freezer and heat up.  However, we have been wanting to eat something a little different but is still light enough to eat.  I decided to cook up a batch of this pizza soup.  It really hit the spot and was so quick to cook up in the pressure cooker as I don’t feel like standing around the kitchen much these days.  I served this up with a loaf of Italian bread. (Oh, and I cooked this up in my little 4 quart pressure cooker.)

1 can petite diced tomatoes (28 oz.)
1 medium onion, chopped
4 garlic cloves, sliced (or use 4 teaspoons of chopped garlic from a jar)
4 cups chicken broth
1 teaspoon salt
1 teaspoon freshly ground pepper
1 teaspoon of dried oregano (I like oregano so I added about 1 1/2 teaspoons)
1 pound Italian sausage, cooked and drained
5 oz. mini-pepperoni (or cut up the regular size pepperoni, but I think the minis look cute)
1 green pepper, diced
1/2 cup dry elbow pasta (or any similar type pasta that you have on hand)
Shredded mozzerella for garnish

Brown the Italian sausage in the pressure cooker on the brown setting. If you do not have a brown setting then use a skillet. After the sausage is cooked drain off the fat. Add the chopped onion, garlic, green pepper and pepperoni. Continue to cook until the vegetables are soft. Add the chicken broth and can of diced tomatoes to the sausage mixture. Stir. Add the salt, ground pepper, oregano and dry pasta. Secure the lid on your pressure cooker and cook at high pressure for 8 minutes. Do a quick release and your soup is done!  Top with some shredded mozzerella cheese if you want!  Delicious! (Note: this can be cooked on the stovetop but will take longer to cook.  It could also probably be cooked in the slow cooker on low for about 6 hours.)

I added some milk and water to the mashed potatoes.  I didn’t have to add much seasoning to the soup because the mashed potatoes already had lots of seasoning in them including cream cheese, sour cream, and butter.  I did add more salt and pepper.  I also added a few dashes of garlic powder.  I also added about 1 cup of grated cheddar cheese to the soup.  Cook this until the cheese melts.

The soup can be topped with chopped cooked bacon, more cheese and chopped parsley.

This turned out so good and it used up the rest of the mashed potatoes.  Even better yet was, it made one meal.

This is the first year I made turkey soup and did not follow a recipe.  This turned out to be the best soup I have made.  I will briefly explain how I cooked it but really you can pretty much put whatever you want to in it.

To begin with I cooked the turkey carcass for about 3 hours.  After the 3 hours I took the carcass out and placed it in a bowl to cool off.  I strained the broth to make sure all bones were out.  Then I skimmed the top to remove the fat.  When the carcass cooled off enough I got what meat I could off of it and put that in the soup.

Then I added what veggies I had.  It ended up being 1 chopped onion, 1 package of sliced mushrooms, sliced carrots, sliced celery, about 8 cut up red potatoes and here is the best part.  I put the rest of the leftover green bean casserole in the soup too.  Green bean casserole has all the ingredients for a good soup already in it like cream of mushroom soup and french fried onions.

For seasonings I put in what I thought my family would like, salt and pepper, poultry seasoning, parsley, cumin, rosemary, thyme and no telling what else I put in there.

Then I simmered all that until the veggies were tender.

I added 1 cup of rice to the soup and cooked it until it was done.

Oh my!  This was good soup.  I made a huge pot full and ended up freezing some too.  Oh yes, serve with any leftover dinner rolls if you have any!

So this recipe used up the rest of the turkey and the green bean casserole.  Next post will be about what to do with leftover mashed potatoes.

This is a good easy recipe and a wonderful way to use up the rest of the Easter ham.  It was cold and rainy here all last week so this soup really tasted good.

I had a lot of milk that I needed to use up fast before it spoiled so I decided to make this soup.  It was wonderful!  We ate this for lunch along with some good bread.

In a medium sauce pan on medium heat, add onions, garlic and butter. Cook until onions are tender.

Add corn, milk, salt, pepper, and chili powder. Bring to a boil and then reduce to a simmer for 15 minutes; cover the pan.

Add cilantro, green chiles, and sugar. Cook for an additional 3 minutes and remove.

Puree the mixture and place back into pan to reheat. Top off soup with cojita cheese.

Variation: This recipe is designed for a 4 1/2 quart slow cooker. For a 3 1/2 quart or smaller slow cooker, use chunks of turkey meat cut off the bones or chicken parts.

This was a recipe I cooked frequently when we lived on the coast.

Combine the tomatoes, tomato juice, water, seasonings and okra in a Dutch oven. Fry the bacon crisp, chop it and lay it aside. Add the flour to the bacon fat in the pan, make a thick paste and simmer until brown. Add the garlic and onion to this, fry until light brown and combine with the tomato mixture. Add the shrimp. Simmer for about 1 hour and 20 minutes. Add the file and serve on mounds of hot boiled rice in deep soup dishes.

I love a good bowl of soup.  I don’t know what it is about soup but it is so satisfying and better yet, it is low in calories!  Just can’t beat a combination like that.  This soup is so easy to put together and it is family approved!  However, there is a word of caution here, if you have people in your family with sensitive mouths then this soup may be too hot for them.  If you are a seasoned Texan like I am, then you will enjoy the hotness that this soup brings to your senses.

This recipe will serve 4 people.

Combine first 4 ingredients in a large saucepan; bring to a boil. Reduce heat, and simmer 5 minutes. Add juice, pepper, shrimp, and tofu to pan; bring to a boil. Cook 2 minutes or until shrimp are almost done. Combine cornstarch and water in a small bowl, stirring until smooth. Add cornstarch mixture to pan; cook 1 minute, stirring constantly with a whisk. Slowly drizzle egg white into pan, stirring constantly. Remove from heat; stir in chili oil and onions.

I don’t know what kind of virus has been going around lately but everyone in the family has it.  I got a request from my youngest to make some Chicken Noodle Soup.  I hear that chicken soup has natural antibiotics in it and that is why it makes you feel better.  I don’t know if that is true or not but it is very comforting to eat homemade chicken soup.  I like to cook it in the crockpot.  The crockpot makes everything so much easier.

Cut up and skin a whole 3 1/2 to 4 pound chicken.  Put it in the crockpot.  Chop 3 carrots and 2 celery stalks.  Add that to the crockpot.  Chop 1 onion.  (I cut the onion in wedges so it can be removed later.  My family doesn’t like chewing onions but I wanted the flavor in the soup. )

This is what the soup looks like after cooking for 10 hours.  mmmmm………..

Remove the chicken from the soup.  Let the pieces cool off, then remove some of the meat and put it back in the soup.  Our family doesn’t like a lot of meat in the soup especially after being sick.  It’s mostly the broth part that they want to eat, so I freeze the rest of the meat.

Add 4 cups of water to the soup.

Turn crockpot to High.  Add about 1 1/2 to 2 cups of egg noodles.  Cook for 1 hour.  It is ready to be eaten up!!  Always seems to go good with saltine crackers too!!  The ultimate comfort food when a person is sick!!!